Short story of the sculptor

My long stay in the u. S. And my studies left certain indelible marks on my development: my perception of things changed and a new horizon with an authentic vision has opened up. I witnessed the birth of a strong motivation to create sculpture as a form of art. While visiting old shops with tools, huge hangars stuffed with the assorted junk as well as those big and popular california flea markets, i was mainly guided by my intuition but with the unique take and outlook at the artefacts which once belonged to different epochs and periods. There i have managed to pick out from that intricate civilizational web those rare and yet numerous samples of culture which people had rarely used (throughout art history) to create sculptures. In such samples i discovered great aesthetic potentials.
My specific goal towards creativity consists of looking for such samples and if i found the right sample to use, it was like a golden trigger to me. The very beginning of the creative process is the moment when i get to hold a certain sampled piece in my hand. I start projecting endless combinations in my brain which in turn, and somewhat like a mental storm, get me to make decisive decisions. In that sense my process gets to be quite different from the classic creativity process of just any sculptor as i create brand new pieces from the old and properly defined forms.
In my own artists terms i do not see these old so called industrial elements as the final products what i perceive in them is a potential of a line, form, new volume, their texture(s) and their kinetic qualities.
These qualities enter my thought process in order to become the concrete pictorial elements which serve me there to compose new forms which are basic ones as they are not endowed yet with specific metaphoric meanings.
This procedure demands all of my attention in order to find a specific creative flow which helps also get rid of certain limitations imposed to me by the industrial elements. These latter ones are likely to limit the space and the scope reserved for the so called artistic freedom of expression.
The chosen object was not made according to certain aesthetic criteria; we see it rather as an element of a machine: this is to say that i deliberately question its function and its essence as i place it in a brand new space, quite different from its old one which is this new domain called art!
I try to preserve the original outlook of the elements built into my sculpture as they reveal its original and pristine quintessence; however as the elements are now completely integrated into my sculpture one can observe and define them in an entirely newly conceived fashion.
Having acted in such a way, i manage to create an eclectic archive or depository of the archaic objects which has become now a legitimate artistic structure on its own thus, a part of th contemporary cultural space. The specific work in this domain represents a sort of connection between the past, the present and future.
However, there is a sort of a scientific and artistic engagement of all the vectors of these mechanic elements which became a part of sculpture almost against their will; these elements conceived in an empty artists studio have also become the living pictorial body in the temporal remix given by the artist.
Thus , he so called disorderly world of the abstraction visibly understood only by the artist , invites the spectator here to discover in the work of art his inner symbolic use of it.
The abstraction causes us to fear the unknown, the fear of wandering alone , fear of getting and being lost in art, as we see no concrete grounding. We see no recognizable form or function, thus all you can count on is the artists suggestion or your own perception.
I opt for the transfer of the manual and mechanical role of the elements into the visual and pictorial sign as they could be interpreted as the important signals through the new visual experience .

Art of the Post-Industrial World

Aleksandar Gligorijevic has sought to find an encapsulation of his unique artistic method: His practice merges the composition of elements, scientific-technological applied knowledge and industrial design, in the form of pure sculpture.  This, seemingly simple definition, is something he grappled with for almost two decades.

The essential question Aleksandar’s dedicated quest in plastic arts can be raised in the following terms:  How does this realm of “pure sculpture” exist in our, post-industrial world?  This quest can  be applied to a wider realm of art and aesthetics: If one’s ouevre turnsto the affirmative question of art, not art as negation, allegory or critique, but the description of an art that operates directly upon the world it is situated in; it is a definition of art that is not at all premised on representation. In this sense Aleksandar is meant to create sculpture that does not start from the idea of representation anything form the visible world.  In art historical narratives since the 20thcentury, this line of inquiry into the notion of progress has rightly pursued the question of ethics as art that has dispelled illusions around the possibility of any art being “pure.” Reflective of a specific Euro-American art and art history, this genealogy attributes the modernist ethical turn to the sculptures of the 20thcentury masters Marcel Duchamp and Constantin Brancusi.  This approach to object making as Aleksandar pursues it implies the world we are situated in – our social, productive environment, our political hierarchies – even if it is not representational.

It can be said that Aleksandar has chosen modular constructions as his starting point principle in making of sculpture, while he did not have interest for a found object as a readymade. Instead, he has focused on the (re)use of  the industrial products that he then worked to perfection.  To what ends?  His goal was to integrate the mass produced parts — that were parts of machines for the process of production through another kind of thought and relationship — and combine them via artistic activity in a different manner of their original (primary) function.  In this way  an artwork is being born, and it communicates  with the viewer on a different basis,  rather than the work done in the classic way through standard media and materials.

His building elements stemmed from the machines  — such as obsolete airplanes parts  — to go beyond repurposing strategy of a new aesthetic entity. I would argue that his main artistic strategy can be called operative realism. As artist explains, his art consists of “deleting existing forms from elements (elements that are embedded or included in the composition of sculptures) and, at the same time, looking for these same material elements of the new line and new forms in order to determine among these initial elements a new relationship for a new sculpture.”  The newly constructed circuit  is monolithic, works  both logically, and poetically. This would be operational quality of an essentialy realistic approach  —  when idea of  art  is accessed through  a specific,  re-configured, existing form. In other words, it does not look like anything those elements previously signified – a new form implies a  suspension in order to allow reality of a newly found configuration.  This basic principle then is pushed in many diverse interactions of object manipulation and hybrid forms.

The interconnected play of the visual  fragmentation of the functional elements is Aleksandar’s poetic principle embodied in the form of sculpture. What makes his artworks realistic is his cultural transference where science and design become art. The artist speaks of his insistence to represent a  specific post-industrial culture sublimated through the functional ingredients of design. His strategy of incorporation and composing mechanical elements  without the logic of the original layout is his personal alchemy:  from scientific-technological applied knowledge and design  to  the form of  sculpture.  His particular insistence on the details of the craftwork and a lot of technical, yet invisible work, as a condition for making precise compounds. Asemblages have allowed Aleksandar to express his type of eclectic compositions that he sees as the most challenging of styles. These hybrids ultimately embody a specific visual identity of  his sculptures that can be defined as his unique style.

Date and place of birth

History of Art , University of Belgrade 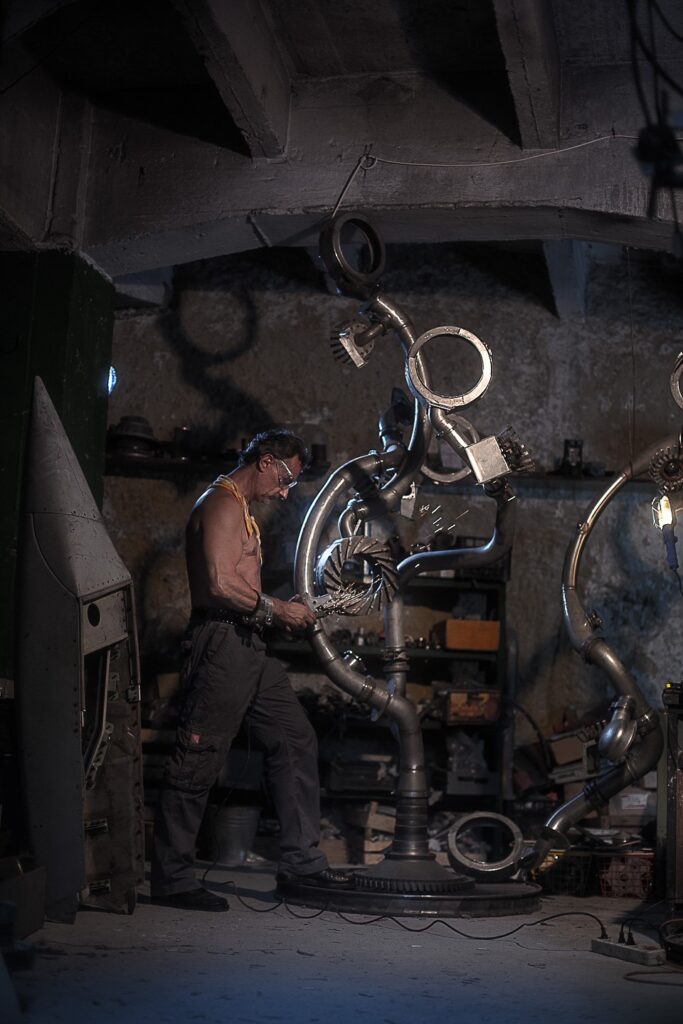