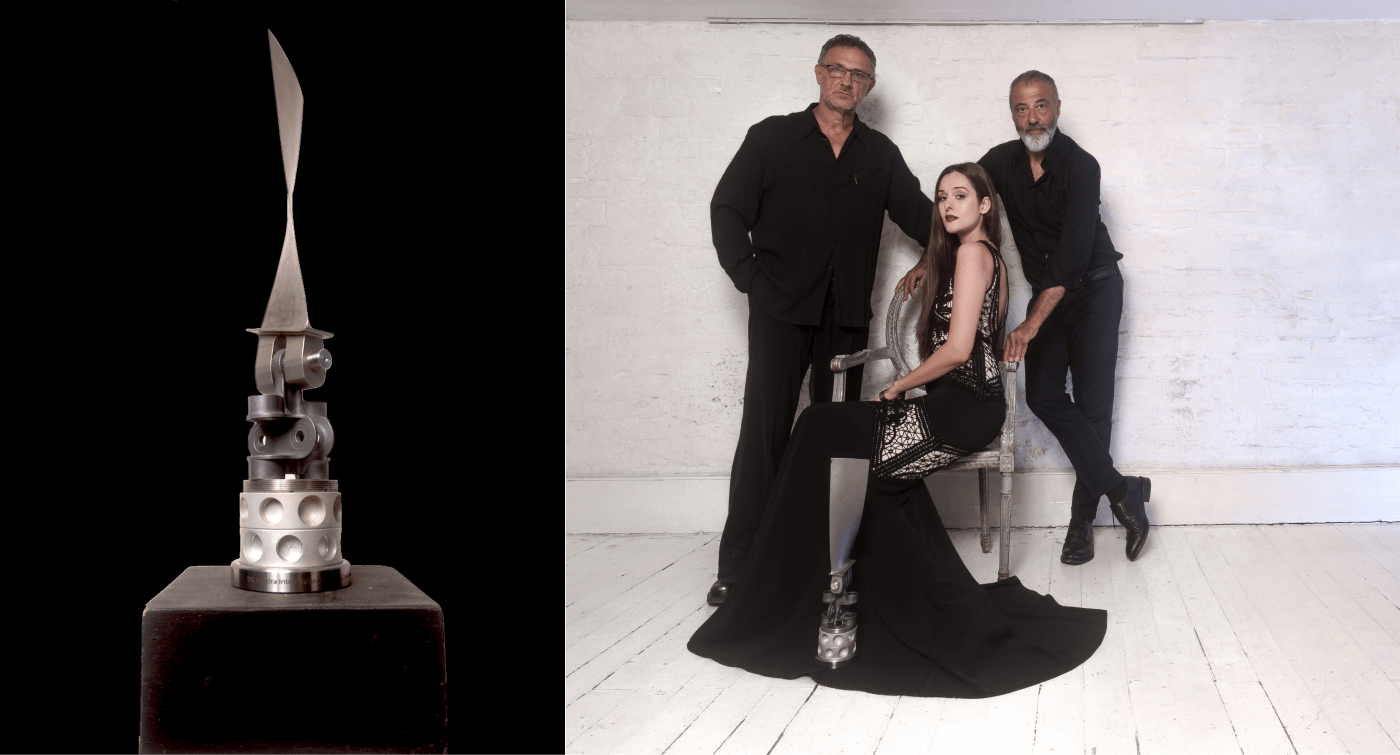 A young curator NATASHA RADOJEVIC FROM THE GALLERY DRINA had presented the AWARD WINNING SCULPTURES of MICHAEL IODICE and ALEKSANDAR GLIGORIJEVIC . THE AWARD UNIMED has GRACED THE 76th INTERNATIONAL FILM FESTIVAL IN VENICE

The award UNIMED 2019 (Unione delle Università del Mediterraneo) had been given to Pablo Larrain’s film “Emma” (Chile) at the 76th International  Film festival  in Venice, more precisely in hotel Excelsior on September 6 , 2022. The leading roles in the film are given by Mariana Di Girolamo  and Gael Garcia Bernal. The film was also awarded the compensation ARCA Cinema Giovani Award as  it was announced the best film in Venice 76.

The award UNIMED 2019 is presented to the artists Michele Iodice (Italy) and to Aleksandar Gligorijevic (Serbia) who are presented by a young curator Natasha Radojevic from the Gallery Drina and PDG ARTE Communications. The sculpture “Oiece by Piece” is constructed from the airplane pieces, and from fragmented segments. It represents the symbol of the spiritual quest for the intercultural exchange and connecting which is pertinent to every humanist approach to life.

The birth of the symbol of the award UNIMED 2019 (otherwise given to the most accomplished film which deals with the cultural differences and the freedom of expression), has also found its proper grounding and expression in  the domain of sculpture filled with handprints…This work has defined not only the unifying sense of the teamwork but it has also defined the skill, beauty, passion and the hand printed sense of belonging as well as a certain feeling of devotion to the work accomplished through the ideas,  the self-reliance  and its sense of the initiative.

The title of this sculpture is “Work after work” is made out of pieces ofr an old airplane, from the fragmented pieces and as such it represents the symbol of the spiritual quest for the intercultural exchange and the interconnecting which are pertinent to any humanist quest. It also presents the free city of Venice which in itself represented the cultural and economic trade between different parts of the world. The lower part of this sculpture seems to represent a  medieval citadel while the upper part of it represents the ailes of an airplane which also serve a certain tradition of communication between different cultures. The author’s concept was also housing  a number of different fingerprints which stand as a  symbol for our polanetary differences and intercultural communication.

As to the creative director and the organiser of this project, Natasha Radojevic had the honour to be selected among six other young curators at the Venice Biennale and to appear at the nineth CEI Venetian forum for the curators of contemporary art.  She has already devoted her work to the Logic Art Space, a cultyural platforme which has enhenced the cultural ties between the Southeast Europe and Italy.

The  UNIMED award was created to honor the memory of the professor Frantz Rizzi, the former secretary and the founder of UNIMED as well as his lifelong comittment  to strengthen the ties between the Medditterranean universities. This award is given to a film which represents the value of the cultural differencies at its best and which entices the exchange and freedom of artistic expression. Right along the artists and the lady curator, the inaugural party had graced with their presence the following people: professor  Francisco Matte Bon, the president of UNIMED and the professor Antonio Falduto – the latter had also initiated the said project